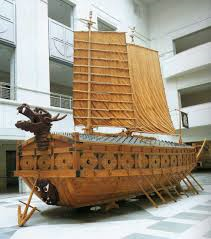 In many cases innovation happens when something very important is needed. Innovation comes from people taking a deep look at their situation and developing significant ideas for resolution. This was never more true than in 1592 when Admiral Yi of Korea was facing certain destruction by the Japanese fleet. Admiral Yi needed to be ready to attack a much larger and better equipped force.

The fierce and sudden Korean attack shocked the Japanese. But unlike their previous poor performance at the Battle of Okpo, the Japanese soldiers fought bravely and returned fire with their arquebuses in a timely manner. Unfortunately for the Japanese, they did not have a chance to board the Korean ships because of concentrated Korean cannon fire. Also, the Turtle Ship was impossible to board anyway due to iron spikes on its roof. Then, the Japanese began to panic when the Turtle Ship smashed into Japanese lines, firing in every direction.

In a couple of hours, every single Japanese warship that had fought was sunk. Admiral Yi and his team put in place some very innovative components that prevented the Japanese from being successful. This included hard wood that could not be penetrated, twelve cannons capable of shooting flaming rods, and a dragon head spewing fire and smoke.

How would you have used innovation in this situation?

Do One Thing Great
Scroll to top